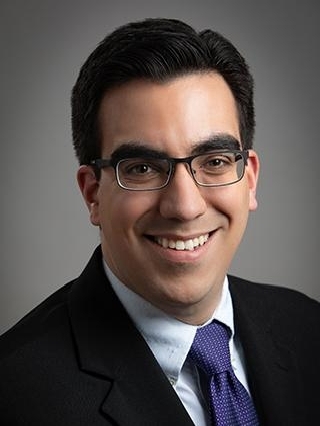 He has been honored with awards for Best Weathercast by the Associated Press and the Michigan Association of Broadcasters.

Ahmad's interest in weather came with a literal bang. When he was younger, a large storm system moved through southeast Michigan and pummeled the Detroit area, with lightning hitting so close to his home it turned a tree on his street to splinters. On that day he fell in love with the weather, and watching meteorologists such as Chuck Gaidica and Paul Gross on WDIV in Detroit helped him decide the broadcasting route was best for him.

Ahmad is a graduate of Central Michigan University and supports his alma mater with a strong passion. He was selected as one of the 2019 10 Within 10, a selection of 10 exceptional graduates from the past decade. Fire Up Chips!

To Ahmad, Michigan is the best place to be a meteorologist. We have 4 distinct seasons (usually), and a chance for everything from tornadoes to blizzards.

His career in Mid-Michigan has brought him from tornado damage paths in Shiawasse, Genesee, and Saginaw counties, to covering heavy floods in Sanford and Midland, and even chasing a tornadoes through Shiawassee County and being one of the first on scene. He also loves being able to visit schools and share his passion for weather with students. No matter what career they want to choose, Ahmad always says to follow your dreams and never give up.

Ahmad is a member of both the National Weather Association and the American Meteorological Society and has won multiple awards for Leadership.

He is also an active supporter of the National Marrow Donor Program to fight Leukemia, Special Olympics Michigan, the American Cancer Society, and is a huge supporter for keeping the arts in our public schools. Music (playing his saxophone) is one of his true passions, along with all things Detroit, supporting his CMU Chippewas, and playing paintball.

Ahmad is happy to call the Clio area home where you can find him taking in all the area has to offer.